The Sea Above, The Sky Below; The National Ballet of Canada, June 6th, 2017

Xiao Nan Yu and Harrison James in The Sea Above, The Sky Below. Image by Monica Guddat.

The Sea Above, The Sky Below was created in honour of Principal Dancer Xiao Nan Yu’s 20th anniversary with The National Ballet of Canada. It is the first ballet designed by fashion designer Erdem Moralioglu and is set to the Adagietto from Mahler’s 5th Symphony. The lighting is by Jeff Logue.

Evgenia Goncharov and Ot Klemann in The Kreutzer Sonata. Photo by Alex Pankov

The Kreutzer Sonata is an adaption of Leo Tolstoy’s novella of the same name. It features an original score by Gity Razaz, libretto by Britta Johnson, set and costume designs by Hyemi Shin and lighting design by Konstantin Binkin.

“Music makes me forget my real situation. It transports me into a state which is not my own. Under the influence of music I really seem to feel what I do not feel, to understand what I do not understand, to have powers which I cannot have.” – Leo Tolstoy, The Kreutzer Sonata

This is the first time I am tackling a linear narrative in my work and I was very interested in finding a way to honour Tolstoy’s riveting arc in a setting and timeline that felt exciting, rich and contained. One quote from the novella has always stood out to me: “The last excuse for our swinish life — children — was then taken away, and life became viler than ever.” In this adaptation, we have begun the story with a paralyzing loss that leaves this young couple with only one another. Their relationship immediately becomes a container for so many overwhelming emotions -anger, despair, regret. Through music, the wife finds an escape. Through music, something very dark is unlocked for the husband.

In the end it is a story about the effect the wife and husband have on each others bodies, and the effect art has on us all.

Calley Skalnik and Felix Paquet in Self and Soul. Photo by Aleksandar Antonijevic.

Self and Soul was initially created for The 12th International Competition for the Erik Bruhn Prize and was subsequently taken into The National Ballet of Canada’s repertoire.

The creation Self and Soul began with an attempt to translate excerpts from Noa Sadka’s book Talking Parts into movement. Sadka’s book is made up of short phrases or sentence fragments excerpted from her diary that depict moments that are at once mundane but also call our attention to vast, universal emotional ideas. In exploring these ideas between two dancers we found an undefined love; one that is not necessarily romantic, familial, platonic or passionate, but one that permeates their every action.

Void and Fire was created for The Royal Ballet as part of the celebrations of Wayne McGregor’s 10th anniversary. The ballet features music by Missy Mazzoli, costumes by Ilaria Martello, set design by architects Julia Backhaus and Martin Tang and lighting by Natasha Chivers.

‘the blue of the sky depends on darkness of empty space behind it. As one optics journal puts it, “The color of any planetary atmosphere viewed against the black of space and illuminated by a sunlike star will also be blue.” In which case blue is something of an ecstatic accident produced by void and fire.’
-Maggie Nelson, Bluets

The sky, or that which is above us in any physical or spiritual sense, is both fearsome in its unfathomable scope and unpredictable in nature. However, it exists so often as a metaphor for freedom and limitlessness. A void – a state of emptiness – and fire – a force so powerful that the sun can illuminate and feed our entire planet – are extremes present in our natural and emotional worlds. These are forces too extreme to be positive on their own. However, they can come together to create a brilliant blue sky in the same way individuals can come together to create all the beauty and love in the world.

The Dreamers Ever Leave You; The National Ballet of Canada, August 30th-September 6th, 2016

“a thrilling and affirming victory for the art form.” Martha Schabas, The Globe and Mail 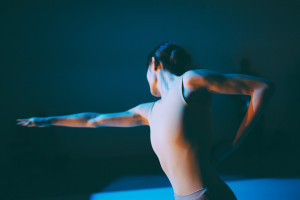 Rui Huang in The Dreamers Ever Leave You. Photo by Karolina Kuras

The Dreamers Ever Leave You is an immersive ballet created in collaboration with The Art Gallery of Ontario. The ballet was inspired by Canadian painter Lawren Harris and features music by Lubomyr Melnyk, costumes by Robyn Clarke and lighting design by Simon Rossiter.

The connection I see between Harris’ paintings and dance lie in their inherent spirituality. Harris abstracts natural forms in order to show their transcendent power, and that is what we do with the human body in ballet. We abstract the way the body usually moves and communicates to free ourselves of specificity and express universal human truths. In dance, the body becomes a physical manifestation of the soul in the same way Harris’ mountains and waters are not just depictions of natural beauty, but step beyond their appearance and capture the immense and invisible power nature holds to move us.
Harris’ paintings create a sense of movement, ephemerality and urgency; we know that these scenes he captured existed only fleetingly in reality, if ever. It is important to me not to create a ballet that attempts to fix and recreate these ephemeral moments, but one that allows these moments of resonance to be different and created anew with every performance. 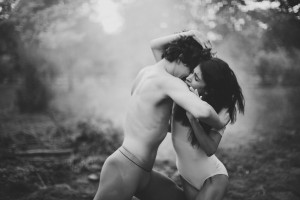 Terra Incognita is the first production created for Robert’s project-based company Wild Space. The site-specific ballet had an original story written by Rosamund Small and music by HIF Biber, Nils Frahm and Clem Leek. More information is available at www.wild.space

“Binet moves powerfully against the grain of expectation” “Countering its surface values, Binet has discovered new depths in the ballet tradition.” - Apollinaire Sherr, The Financial Times

“Mr. Binet’s choreographic voice in “The Blue of Distance” is the strangest and most remarkably poetic among the premieres.” – Alastair Macauley, The New York Times

Sterling Hyltin, Gonzalo Garcia and Harrison Ball in The Blue of Distance. Photo by Paul Kolnik.

The Blue of Distance premiered as part of New York City Ballet’s Fall 2015 Gala and will be performed a total of 10 times through the Fall 2015 and Winter 2016 seasons. The ballet is set to Oiseaux Tristes and Une Barque Sur l’Ocean from Maurice Ravel’s Mirrors. The costumes are by fashion designer Hanako Maeda of ADEAM.

Orpheus Becomes Eurydice; a co-comission between The Banff Centre and The National Ballet of Canada, July 9th-11th 2015 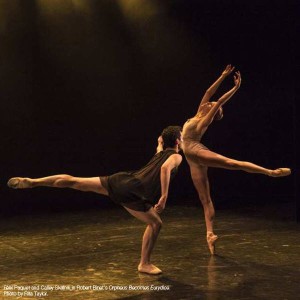 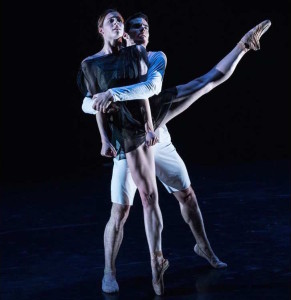 Orpheus Becomes Eurydice tells four interconnected stories of love and attempted rescue. This ballet was a collaboration with Librettist and Dramaturge Rosamund Small and set to music by the composer Missy Mazzoli.

Excerpts of Orpheus Becomes Eurydice were performed at TEDxToronto 2015. Watch it HERE

The Wild Space Between Two Hearts; The National Ballet of Canada, March 24th 2015 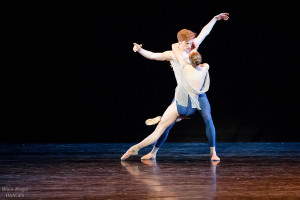 Hannah Fischer and Ethan Watts in The Wild Space Between Two Hearts. Photo by Bruce Zinger.

Created for Hannah Fischer and Ethan Watts of The National Ballet of Canada for the contemporary portion of the Eleventh International Competition for the Erik Bruhn Prize. Set to Rift from Silfra by Hilary Hahn and Hauschka. Have a look into rehearsals here.

Premiered in Amsterdam and tours through The Netherlands as well as to the UK and Spain. Set to Birds in Warped Time II by Somei Satoh.

Created for the Fall 2014 Session of The New York Choreographic Institute. Set to Lieux retrouvés: I. Les eaux and III. Les Champs and In Seven Days: VII. Contemplation by Thomas Adès. 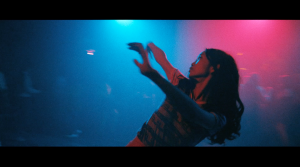 Miyoko Koyasu in ‘The Party Line’

White Rush; Dance film commissioned by The Royal Ballet and featuring dancers of The National Ballet of Canada 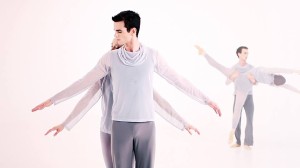 Created for the National Ballet of Canada’s annual fundraising Gala at The Four Seasons Centre for the Performing Arts in Toronto Canada and set to Missy Mazzoli‘s These Worlds in Us. 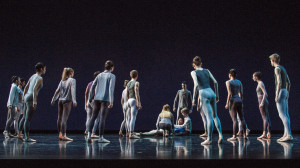 Created as a part of the National Ballet of Canada’s ‘Innovation’ programme at the Four Seasons Centre for the Performing Arts in Toronto, Canada. The ballet is set to an original score by Owen Pallett with designs by Hyemi Shin and lighting by Jeff Logue

Free Verse and Open Form; commissioned by The Royal Academy of Dance for The Genée International Ballet Competition, September 21st-30th, 2013

Performed by all finalists at the Theatre Royal Glasgow on September 30th, 2013. Set to excerpts from Sergei Prokofiev’s Visions Fugitives. 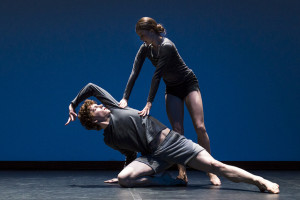 Performed as part of Random Works at Kings Place in London. Set to original music by Leafcutter John and Max Baillie

Created for students to perform at Assemblée Internationale 2013, a festival hosted by Canada’s National Ballet School that brought together eighteen of the top ballet schools from around the world. Set to Agu by Marc Mellits. 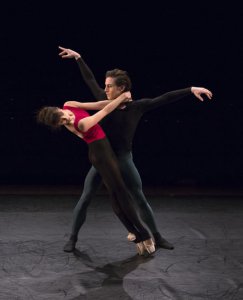 Performed as part of The Royal Ballet’s Draft Works programme in the Linbury Studio Theatre at The Royal Opera House, Covent Garden. Set to excerpts from Jóhann Jóhannsson’s Fordlandia.

Performed in the Linbury Studio Theatre at The Royal Opera House, Covent Garden, as well as extensive touring throughout the United Kingdom and to Bermuda. Set to GODOT by Hilary Hahn and Hauschka. 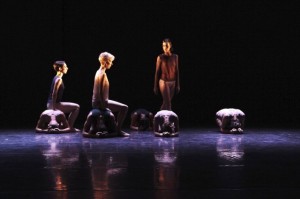 Performed as part of a mixed bill featuring The Royal Ballet and Wayne McGregor | Random Dance and commissioned by The Royal Opera House to celebrate 10 years of collaboration between the two organizations. Set to music by Hildegard von Bingen, Peteris Vasks, Olafur Arnalds and Jóhann Jóhannsson.

Created for the YouDance outreach performances by the National Ballet of Canada at the Betty Oliphant Theatre in Toronto Canada. Set to etudes by Einojuhani Rautavaara

Performed as part of The National Ballet of Canada’s Choreographic Lab and set to excerpts from Musica Callada by Federico Mompou.

Created for Principal Dancers Heather Ogden and Guillaume Côté to perform at The National Ballet of Canada’s 60th Anniversary Diamond Gala at The Four Seasons Centre for the Performing Arts. Set to the adagio from Edward Elgar’s Cello Concerto in E Minor, Op. 85 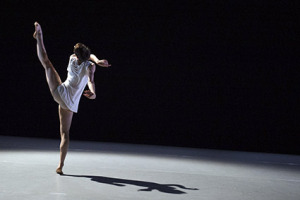 Commissioned by Wayne McGregor for a celebration of Bob Lockyer at The Place. Bob Lockyer was the executive producer for dance programmes at the BBC for many years. This work was set to Loved One by Arve Henriksen and Palimpsest by Smog.

Created for the Bundesjugendballett and performed with singers and musicians from the Lied Academy at the Heidelberger Frühling. Set to Franz Schubert’s Die schöne Müllerin.

Performed as part of The Royal Ballet’s Draft Works programme in the Linbury Studio Theatre at The Royal Opera House. Set to Heinrich Ignaz Franz Biber’s Passacaglia from the Rosary Sonatas.

Created for the apprentices of The National Ballet of Canada to perform in their outreach and education performances. Set to preludes and etudes by Alexander Scriabin.

Created during the Spring 2011 Session of The New York Choreographic Institute, an affiliate of New York City Ballet, and set to an original score by Gity Razaz.

Created for The National Ballet of Canada’s Choreographic Labe while still a student at Canada’s National Ballet School. Set to Company I-IV and the first movement from String Quartet no. 3 by Philip Glass.