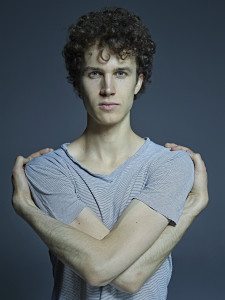 Robert Binet was born in Toronto, Canada and was appointed Choreographic Associate of The National Ballet of Canada in June 2013 following eighteen months as the Royal Ballet Choreographic Apprentice.

Robert was selected by Karen Kain as her protégé for the 2017 Governor General’s Performing Arts Awards Mentorship Programme.

One of Robert’s most recent creations for The National Ballet of Canada was an immersive ballet titled ‘The Dreamers Ever Leave You’. It premiered in August 2016 at the Art Gallery of Ontario and was hailed as “a thrilling and affirming victory for the art form” by The Globe and Mail. This followed the world premiere of Terra Incognita, a site- specific ballet with an originally commissioned story featuring dancers from top international ballet companies, for Robert’s project-based company Wild Space.

In 2011, the position of Royal Ballet Choreographic Apprentice was created expressly for Robert. In this position he was mentored by Royal Ballet Resident Choreographer Wayne McGregor and had the opportunity to create works on Royal Ballet company dancers as part of Draft Works in 2012 and 2013. Additionally, Robert had the privilege of creating three works for Company Wayne McGregor. One of these works, ‘Life’s Witness’, was commissioned by the ROH to celebrate 10 years of collaboration between the Royal Ballet and Mr. McGregor. Robert was invited by The Royal Ballet to create ‘White Rush’, a dance film, in 2014 and ‘Void and Fire’ in 2016.

Additionally, Robert has created works for the Dutch National Ballet’s junior company, the Estonian National Ballet, the Genée International Ballet Competition, Ballet Black and the Hamburg Ballet’s junior company. His work has been presented by the Art Gallery of Ontario and the Museum of Fine Arts, Boston and is part of the Royal Academy of Dance Advanced Syllabus. Robert also choreographed the music video for Owen Pallett’s ‘Song for Five & Six’ and Belle and Sebastian’s ‘The Party Line’.

“a name to watch” - The Guardian

“Mr. Binet’s choreographic voice in “The Blue of Distance” is the strangest and most remarkably poetic among the premieres” – The New York Times

“Binet is more than a breath of fresh air in the ballet world; he’s like a blast of Novocain. Here’s a choreographer with a rich and extensive imagination who wants to do things differently and clearly has the skills to realize his ideas. He’s an artist who is asking questions of what ballet should and can do, and you can see these questions in his multivalent and technically intricate work. You can also see that he wants to push himself further, and I suspect we’ll be seeing bold innovation in the years ahead.” - The Globe and Mail